We Wanted To Wake Up New - Ceramics Student Exhibit - Library 580 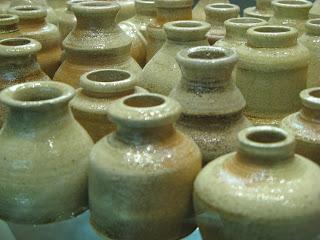 We Wanted to Wake Up New

An artist inspired by history incorporates
archival resources into her work

Elizabeth Davis is currently a Studio Art Major in the Ceramics Program at Texas State’s School of Art & Design.  Originally from Corpus Christi, Texas, she has also lived and studied in Budapest, Hungary, New York City, and Eugene and Portland, Oregon. The exhibited work, We Wanted to Wake Up New, is part of her portfolio to gain admission to a MFA Program in Ceramics. It combines her interests in History, Storytelling, and her three favorite mediums: writing, ceramics, and printmaking.


The longing to visualize a story or moment in someone’s life is one of the reasons I create art. Equally important is the unremitting desire to encounter a mystery and follow its path. Investigation and contemplation are paramount as is the need to intentionally stop short of a tidy explanation.

We Wanted to Wake Up New began as favor to a friend to make an inkwell for Civil War Reenactments. The inkwell shape quickly took on greater meaning as I imagined each one as a vessel containing a soldier’s desire to reflect, record, and communicate. I wondered how they might view our wars today. I wanted to talk to one of them.

The words screen printed on the bottom of the inkwells come from the letters of Private William (Burkhart), dated 1862.  He writes from Headquarters in Velasco, TX and Camp Lubbock, TX to Celia Schrock in Waterville, TX.
Research


The second part of this project was to find an authentic letter of a Civil War soldier to screenprint on the bottom of the inkwells. It was important to me that the words come from a private, not an officer, stationed in Texas and reflect honestly his military and personal experience. With the help of librarians Margaret Vaverek at Alkek Library and Margaret Schlankey at the Briscoe Center for American History, I found letters from Confederate Army Private William (Burkhart) stationed at Camp Lubbock, Velasco, Texas, written to Celia Shrock of Waterville, Texas.

The project took about 100 hours over the course of a semester. The main steps involved were the creation of the inkwells on the potter’s wheel, tracking down the original letter, creating a digital file from the letters to make screen printed decals, transferring the decals to the inkwells, and the two step firing process.

While I deliberately chose a range of legibility in the text, here are transcripts of the three excerpts used:


“Let others love the tented and battle field, and waste their time and destroy their constitutions in the race after face, but as for me let my life be one of peace, in the society of friends and relations.”

“If you were about to be transformed into a man, I would press it upon you, to make some other arrangements than going into the army. I advise you to engage a substitute, feign sickness or pretend to be dead. Do anything, rather than to be caught in my trap.”

“We have finally reached the point, which is beyond my descriptive powers, in its horror. Nature made it sufficiently attractive, but man in his vileness, has so entirely transformed the scene, that my spirits become dejected, my arm palsied, and melancholy takes general possession of me, when I contemplate its full reality.”

Art and Image Sites or Publishers